Colorful street vendors, an integral part of Jakarta’s landscape that can make other cities look boring – even sterile.  A thriving underground economy, street vendors reflect a resourceful entrepreneurial spirit that delivers goods and services directly to the consumer using some ingenious forms of transportation.

The iconic kaki lima (five legs), so called for the three “legs” on the cart and the two legs that push it, is the heart and soul of low-cost, efficient transportation systems.  Joined by a plethora of modified bicycles and scooters, this unregulated industry provides millions of Indonesians with a livelihood.  We see them every day, but who are they? What are their days like?  I rode a bicycle around my neighborhood to find out more… 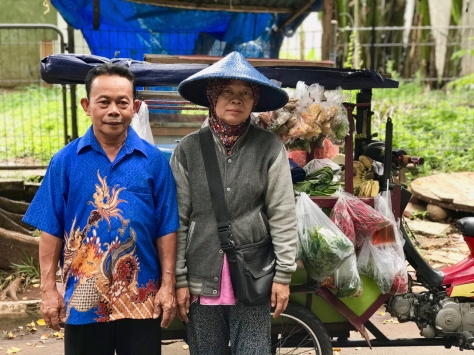 Looking quite stoic in the picture, Pak Sarkum and his wife light up when they talk about their life together.  The couple have plied the streets from Teroggong Kecil to Pondok Indah since 1982, earning enough to buy a house and raise a family of four.  “Banyak hal!”, Pak Sarkum says with a laugh, “I sell many things! Tofu, tempeh, vegetables…” When asked about places in the world he would like to visit, the grandfather of five smiles and bellows “Everywhere!”  Patting his belly, he looks at his wife and adds “But I need to be fit, so I better start working out!”

Praised by surrounding female customers for his good looks, Pak Ujang has worked in Jakarta for five years.  He walks from school to school pushing a kaki lima piled high with colorful toys – the kind of goodies that cause children to tug on their mother’s arm and beg.  He is a shy man with a peaceful demeanor who is an oasis of calm on streets railing with speeding scooters, clambering school kids and cackling mothers.  Usually working 12-hour days, he wistfully says that his dream is to find a good-paying job near his kampung (village) in Sunda so that he can live with his wife, his children and his parents.  Until then, he will stay in Jakarta and send most of his money back home.

Fish on a Bike

Dressed in board shorts and sporting an ear-to-ear grin, Ahmad, projects an air of “cool”.  He has been selling tropical fish for over seven years.  He can tell you the names of each one and which species are compatible in the same aquarium.  His bicycle is equipped with a rack made of bamboo, reminiscent of a hospital IV pole, where he hangs dozens of clear plastic bags full of the live creatures.  Ahmad buys everything at the bazaar and has no desire to explore the ocean.  “Hiu!”, he declares with a visible shudder – he’s doesn’t want to be eaten by sharks!

A gregarious gentleman, Pak Jonny has been a vegetable seller for 28 years.  Waking up each day 2:00 am to be first at the market, he buys a mountain of vegetables, bags them and carefully arranges everything onto his custom-made scooter before embarking on a daily route through Jakarta Seletan.   He says when dealing with bules (foreigners) he has learned to write prices down on paper to avoid misunderstandings.  Honest and indomitably hard working, he typically returns home well after sunset.  When asked if there is anything else he would rather do, his eyes glaze over and he shakes his head.  After a minute of silence, he quietly replies, “No, because this is how I support my family.”

Edi, a trained tailor from Pakalongan, left his home five years ago to make it big in Jakarta.  With a foot-powered sewing machine cleverly mounted on a three-wheeled bicycle, he patrols the streets of Pondok Indah attracting local and expat customers alike. He sews Levis for men, women and children and can repair just about anything else. An articulate and ambitious man, he is happiest when it is sunny outside and he can get lots of work.  He dreads the rainy season when all he can do is sit at home eating, smoking and drinking coffee.

As Pak Jono pushes his kaki lima through the twisting alleyways of Jakarta, his lilting call of “Jagung!” alerts everyone that it is time for a treat.  Known as blendu in Ceribon and konsi in Sukabumi, jagung is a corn dessert garnished with multicolored sweets and grated coconut. Each day he heads to the market at 2:00 am to buy supplies.  Returning home, he follows a painstaking five-hour cooking and cooling process that causes the kernels to double in size. To maintain quality, everything must be sold the same day, which typically entails a foot-weary, ten-hour journey through Lebak Bulus and Cilandak. With sleepy eyes and a Cheshire cat smile, he tells me he has been doing this for over 28 years.

Pak Asim works hard.  One night when returning home, he was so tired he failed to see a polisi tidur, one of Jakarta’s ubiquitous speed bumps, and hit it so hard that dishes, silverware and condiments were sent flying in every direction!  His specialty is Baso Malang, a tasty meatball soup served with tofu and crispy wanton, that originates from his region in Central Java. Insisting that it is made fresh every day, he arrives at the market at sunrise and cooks all morning.  He starts his route by lunchtime and continues until the last ladleful is sold, often resulting in a 15-hour workday.  Asim would like to return to his kampung to live with his wife and children, but remains in Jakarta to make his fortune.

The singsong call of “Sapu-uuu” echoes off the buildings as Nana resolutely strides through Cilandak, Cipete and Kemang.  Rhythmically recoiling on his shoulder is a long bamboo strip called a pikulan that is strung with brooms, mops and a multitude of kitchenware. Having carried this heavy load for over 18 years, Nana appears a couple centimeters shorter than he actually is.  Normally a happy guy, he gets annoyed by the longstanding catcall of, “Hey!  Are you mad at your wife?  Why are you selling her stuff?”. Nana smiles broadly when he talks of one day making a pilgrimage to Mecca and then travelling on to see the sights of Germany. 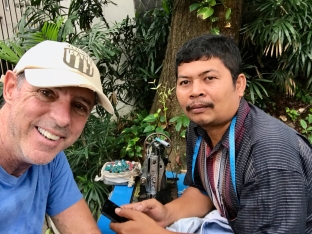