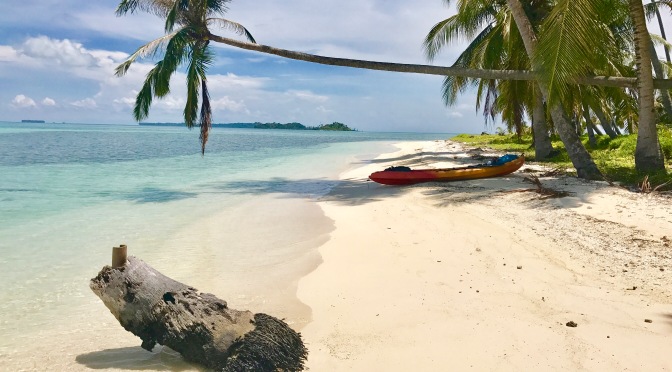 I paddled out of the little harbor serving the village of Haloban, returning the greetings of fishermen and kids along the way. An hour later I pulled the kayak up on a deserted beach and dove into the crystalline water. Welcome to paradise.

The Banyak archipelago consists of 44 islands lying over 30 km off the west coast of Sumatra. Not many people live out there so many of the islands are uninhabited, covered in jungle and outlined with white sand beaches and coconut palms. If you close your eyes and imagine tropical paradise – you will find that place in the Banyak Islands. I spent a week solo kayaking around these little gems staying with a village family, in beach bungalows and camping out in the middle of nowhere. It was a perfect way to feed the spirit and leave the noise of modern day life behind.

To get to the Banyak Islands, I first flew to Banda Aceh and spent a day visiting the poignant reminders of the 2004 tsunami like the boat that settled on top of a house, the dome of a mosque that floated two kilometers from the rest of the building, and an offshore power-generating barge that was washed five kilometers inland.

A day later I boarded a twelve-seater airplane for a spectacular flight over some of the largest tracts of untouched rainforest in Sumatra. It brought the fun back into flying! One stop and two hours later, I landed in the town of Singkil where I caught the public boat out to the islands.

The boat was crowded with local people and a sprinkling of European backpackers. We were all lulled by the gentle rocking and entertained by the occasional visits of dolphins and flying fish that skipped across the water. It was a very meditative journey.

We reached Balai, a charmingly ramshackled little village, in less than four hours. Balai serves as the main transportation hub for the rest of the Banyak Islands. There I drank black Acehnese coffee with a group of fishermen and within an hour was boarding one of their boats en route to Pulau Tailana (Tailana Island).

Pulau Tailana is the liveliest of the Banyak Islands and a great place to unwind from your journey. I slept in a small hut on the beach greeting each day with a swim and closing each day with a sunset. In between, I went snorkeling, diving and island hopping on local fishing boats.

General map of the Banyak Islands 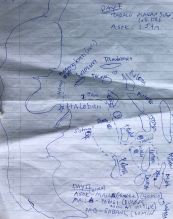 Anhar adds some islands that are not on the general map

The reefs around the Banyak Islands are not as spectacular as other parts of Indonesia because of the damage caused by the 2004 tsunami, however it is a fascinating place to witness coral regeneration and is a testimony to the resilience of Mother Nature.

Late one afternoon I caught a boat to Haloban and met up with Anhar, my connection for kayaks and camping equipment. He got me settled into a villager’s house and later that evening we pored over maps of the islands.

The next morning I took a day trip out of Haloban to the beautiful islands of Pulau Lamun and Pulau Madang Kati. I paddled over glassy seas and through swirling currents. I honed my kayak surfing skills, paddling hard, leaning back and riding the white water on a number of reef breaks. I saw green sea turtles and snorkeled with the kayak tethered to my wrist. I stranded myself on deserted beaches and dined on coconuts and papayas. A lot of times I caught myself laughing out loud- it was pure joy.

That evening back at the guest house, I ate a delicious fish curry to the haunting melody of a young girl reciting prayers from the Koran at the feet of her grandfather. I felt grateful to be welcomed into their home and into their lives.

The next morning I picked up a tent, bought some supplies, and set my sights on Pulau Biawak, a small island with seven palm trees and a beach about 15 kilometers to the northeast.

There were many islands to explore along the way. My first stop was the southern tip of Pulau Rago Rago. There I tied the kayak off to a fallen coconut palm and took a swim. Afterwards, I headed towards Pulau Tabalu, where I encountered the only person I would see all day, a beetle-nut-chewing fisherman with a broad, red grin. He gave me directions to Pulau Biawak by pointing towards a small island off in the distance maybe two hours away.

I headed in that direction and took time to explore a couple more islands along the way, enjoying the solitude. I listened to the sound of the paddle as it dipped into the water and the gentle splash of the bow wave as it cut through the velvety sea. Occasionally I was visited by a giant turtle or a soaring sea eagle. The past and the future faded away and there I was – living in the moment.

It was late afternoon when I washed up on the shore of Pulau Biawak. After a long swim I set up the tent and ate a simple meal to a technicolor sunset. That evening, in the blackness of my own private island, I walked through the shallows kicking up luminescent sea lice underneath a sky full of stars. It had been a very satisfying day.

The next morning came on bright and sunny. After packing up the gear I headed south towards Pulau Asok. There I found a fishing boat full of water, floating mysteriously in the current like a ghost ship. It was a strange sight and I wondered how it got there.

Rounding the southern tip of the island, I pulled up to a beach that looked like my screensaver. The island was totally deserted. Like a castaway, I sat in the turquoise water eating coconuts and watching thunderheads drift across the sky.

At mid-day, I continued south to Pulau Pablisi and searched in vain for the elusive dugong amongst the sea grass. Noticing I was low on drinking water, I then set out for the village of Ujung Sialat about an hour away. En route I snorkeled a coral garden populated with pairs of panda butterflyfish, Moorish idols and schools of ravenous angelfish – my kind of shopping trip!

I tied up in the harbor and found a little shop to buy some water, coconuts, bananas and papayas. What they didn’t have, they set out to find somewhere else in the village. I chatted with the store owner over coffee while kids jumped off the dock and fishermen spread their catch out to dry in the sun. It was a lovely little place.

Leaving the village to a raucous chorus of farewells, I aimed my sights westward towards Pulau Pandan, a couple of hours away. About an hour into the paddle a fisherman came by and threw out his stern line. I tied it off to the bow of the kayak and had a great time surfing his wake all the way to the island.

Once he dropped me off the silence crept in. I realized I was alone on a tiny island with four palm trees and a beach surrounded by nothing but the deep-blue sea. Perfect! I explored the reef, stalking a large moray eel, then set up camp and built a fire. After cooking a gourmet meal of noodles, bananas and peanuts, I waded out to deep water and ate it while watching the sun go down, occasionally flicking noodles out to a frenzy of fish. Between the sunset and the fish, it was like watching two movies at once. That evening I laid on the beach till midnight staring into the galaxies and counting shooting stars. Once again, I caught myself laughing out loud.

The next day was spent beach combing, chasing turtles and snorkeling tiny atolls that I discovered along the way. By sunset I was paddling back into the tiny harbor of Haloban. I checked into the guest house and then we were hit by a tempestuous storm – I was glad I wasn’t camping out.

The next morning, I showed Anhar a picture of the half-sunken boat and it caused quite a stir. The boat belonged to a friend and had been lost for days. Within an hour I was leading an expedition back to Pulau Asok, with my kayak on board. The storm the night before had blown the boat far eastward, however, we eventually found it and I became the hero of the day. 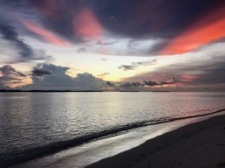 I wanted to paddle across the northern portion of the archipelago, so they dropped me off at Pulau Sikandang, an idyllic island with powdery white sand beaches. Over the next few days I explored more islands, slept in beach huts and paddled my way westward, returning to Pulau Tailana. At times I was challenged by stormy weather with waves crashing over my stern, and at other times I just sat on the beach eating papayas living the dream.

It had been one of the best weeks of my life…