In 806 AD the Buddhist scholar Kukai returned to Japan from his studies in China with the intention of spreading Buddhism. He came to the mountainous island of Miyajima and undertook one hundred days of Gumonji, a secret Buddhist practice, then established Mt. Misen as an ascetic holy mountain. There he lit Kiezu no Hi, a flame that has burned for over 1,200 years. Kukai went on to become a great writer, poet, calligrapher, engineer and the founder of Shingon Buddhism and is revered as one of Japan’s great Buddhist teachers.

Today Miyajima is home to the Itsukushima Shinto Shrine, the famous “floating” Torii Gate, and remains a retreat for those willing to wander. Deer are considered sacred messengers of the gods here and roam freely as they have for centuries. We set out to experience the holy mountain, starting with the meandering temple complex of Daisho-in. Visited by the Dalai Lama in 2006 to commemorate its 1,200th anniversary, it is a place of cultural and natural beauty. We rang the giant bonsho bell, admired the fragile sand mandala made by Tibetan monks, descended into the spiritual passage under the altar of Kannon-do Hall, and walked amongst hundreds of jizo bosatsu, statues that are said to redeem the spirits of lost children.

We then hiked the pilgrimage trail five hundred meters up the mountainside. This trail, shaded by ancient coniferous trees, has been used by monks and lay people for over 1,000 years. En route we climbed over 2,000 steps and cooled off at the base of a waterfall before navigating through a maze of giant boulders to the observation deck on the top.

From the platform there was a glorious 360° view of the Seto inland sea, emerald islands and the city of Hiroshima. I could not help but to look towards Hiroshima and imagine what horrified pilgrims saw on August 6, 1945, when the atomic bomb was dropped. It is very fitting that in 1964, the Flame of Peace in Hiroshima was lit from the Kiezu no Hi, Kukai’s eternal flame.

Kukai lived in Nara both before and after his trip to China. Upon his return to Nara he published many works on Shingon Buddhism and became the administrative head of the Todai-ji, the Great Eastern Temple.

We took the train to Nara, rented bicycles and rode towards the Todai-ji, dodging pedestrians, cars and free-roaming deer along the way. Today the Todai-ji stands as the world’s largest wooden structure and houses the world’s largest bronze Buddha statue. Its construction, which began in 743 AD, involved 2,600,000 people with 360,000 working directly on the statue. The process nearly bankrupted Japan. Entering its cavernous interior has a way of making one’s problems feel small and insignificant.

In 816 Kukai established a Shingon monastery at Koya-san. When he died in 835, the nearby Okuno-in cemetery became his final resting place. It was then that Kukai became known as Kobo Daishi, “The Great Teacher of the Vast Dharma”.

At Koya-san we stayed in a shukubo, a traditional temple lodge, furnished with tatami mat beds and yukata robes which we wore while gazing at the well-tended gardens over tea. In the evening we were served shojin ryori, an exotic, twelve-dish vegetarian meal that activated tastebuds I never knew existed.  The meal was explained by a resident monk.

The next day, we joined in morning prayers, a mesmerizing brain cleanse of chanting punctuated by the deep sound of the bowl-shaped rin gong. Okuno-in is a mysterious place where towering cedars, many over 1,000 years old, create a natural sanctuary for the Gobyo, Kobo Daishi’s mausoleum, and the additional 200,000 shrines honoring monks, feudal lords and lay people who have died over the past twelve centuries. It is Japan’s largest cemetery.

But wait…did they really pass away?

According to Shingon tradition, Kobo Daishi is still alive. Others who are interred or had their ashes brought to Okuno-in are “spirits in transit”. All are awaiting the arrival of Miroku, the Future Buddha, whose message will be delivered by Kobo Daishi himself. Perhaps this is why Okuno-in oozes such tranquility. Far from being foreboding, Okuno-in radiates harmony, linking the beliefs of man and the sacredness of nature.

From beginning to end, the winding path through Okuno-in is a magical two kilometers. Near the end is the Torodo, which houses hundreds of lanterns, some that have been burning for over 900 years. Outside the Torodo, people splash water on deities while praying for the spirit of their loved ones. Just beyond that in the Gobyo, Kobo Daishi waits in deep meditation for the Future Buddha…

A Japan Rail pass will significantly reduce the cost of getting around. The pass is also valid on many buses and boats. Passes must be purchased outside of Japan, so do this a few weeks before traveling at:  www.jrailpass.com

As a general rule, always book ahead. Try to stay in ryokans (Japanese-style inns) or Air BnB’s.

The Japanese admire perfection, and this is reflected in their food. 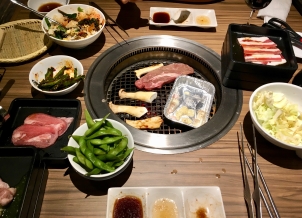 All you can eat Yakiniku. Food is not cheap, but considering the quality it is a good value. Enjoy! 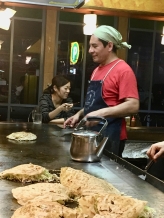 The famous Lopez, a Peruvian native, learned to make under a master chef.

Hiroshima :through the cenotaph, you can see the Flame of Peace and the Atomic Dome in the distance.

A pot of shabu shabu simmers in the middle of the table. 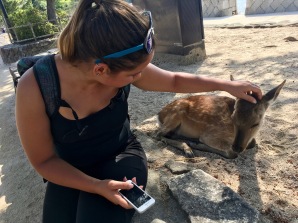 The tame, four-legged messengers of the gods. 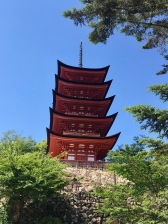 A temple on Mt. Misen.

The Atomic Dome in Hiroshima. This building, at ground zero, survived the atomic bomb and stands as a telling reminder of the insipid power of nuclear weapons.

One thought on “Mystical Japan: Retracing the Footsteps of One of Japan’s Great Teachers”